Check back here regularly to find out what's going on.

I was extemeley honoured to accept a master craftsmans certificate in stonemasonry by the "Worshipul Company of Masons" at a ceramony in the carpenters Hall in the city of London on the 11th of March 2019. This presigious award was presented by the Lord Mayor & the Master of the Masons Guild. The award is given by the ancient Masons livery guild & nominees are judged by a panel of their peers appointed by the city & guilds institue & the stone federation of Great Britain. It is the highest award that a stonemason can recieve for their craft in the UK and I am extreamley proud to have been considered deserving of it!

Read more about it in this article by Trudi Davidson on Hull-Live. Link below 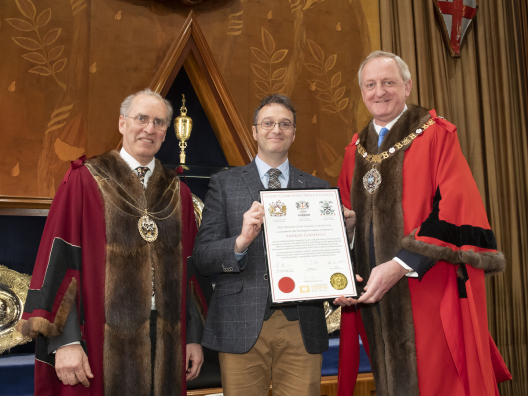 More than 60 Stone Carvers from across the world took part in York Minsters 3rd Stone Carving Festival 17-19 August 2018. Participents were given 16hrs to carve a stone with the theme of "all creatures great & small" all 60+ stones were auctioned off to the public to raise funds for the ongoing restoration works at the minster.

ANDLEE mallets were among the official sponsors giving away 4 mallets as prizes for each of the different categories. I also entered the carving competition & won the prize for Mason's choice, a vote was taken from all the carvers for best carving & I was delighted when my stone "rat catcher" won!

My design was based on an existing carved capital from 1903 in Barcelona, with the addition of a crafty looking cat.

Richard Bossons - The Worshipful Company of Mason's Award (He was using an ANDLEE too!) 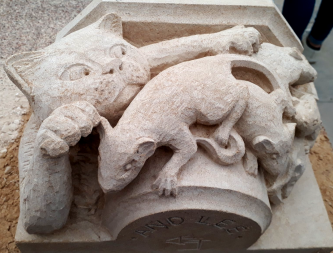 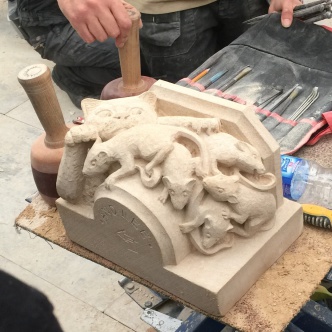